The Pond is the oldest thing in Sunningwell. It’s the ‘well’, meaning a spring, which attracted the Saxon warlord Sunna and his tribe (his ‘inga’) to settle here. The water still flows in at the back of the pond, fed by underground aquifers beneath the Corallian ragstone of Boars Hill and ever so slightly warmed by its passage (as can be detected by the vapour it generates on a frosty morning). Over the centuries the Pond remained a focal point of the village, though its precise shape and extent may have varied. In the time of the artist JMW Turner, whose uncle and aunt lived just behind the Pond, it was evidently possible to walk all round it.

Besides its use as a water supply. the Pond long served as a place for working horses to bathe and for ironwork from the nearby forge to be cooled. At times it may well have been stocked with fish and ducks for local tables. Nowadays it functions as a village amenity and a haven for wildlife. There is a small population of water voles, an elusive and heavily protected species. Moorhens and herons can be seen from time to time, as well as the occasional kingfisher and grey wagtail. There is attractive vegetation around the pond, ranging from the elegant weeping willow to an early-flowering marsh marigold. The plants actually in the water raise issues of maintenance which are discussed in the reports below.

For years the Pond, like other similar bodies of water, has been accumulating an ever-deeper layer of silt. The inflow is relatively clean, but is constantly drawing in small particles of sediment, and this is aggravated by runoff from nearby surfaces. The material deposited is nutrient-rich; in bulk it damages the habitat; and it reduces the depth of water available for aquatic life. Our guess was that the Pond had not been dredged for upwards of 20 years; so in February the Parish Council engaged a local contractor, David Carter, to do the job. This seemed very suitable, since he was brought up in the village and attended school in the building behind the Pond.

Working with a small digger David completed the task in two days. The process was carefully monitored by the water-vole officer, to make sure of minimum disturbance. A vole actually came out to inspect what was going on, and seemed unperturbed. At this writing (10 April) at least two voles are still in residence, and have become quite a tourist attraction, since they often feed close to the pavement. We hope other wildlife will now find the Pond more congenial: there was frogspawn last month, though a large carp seems only to have been reported on the first of April.

You may wonder what became of all the silt. Since a local landowner withdrew permission at the last moment for us to spread it on his field, it was necessary to deposit it on the Village Green, near the Beaulieu Court entrance, where it currently fills part of one of the historic furrows. This is well away from our conservation areas, where it would be an undesirable substance. It will be interesting to observe what kind of plantlife has colonized it by the summer. 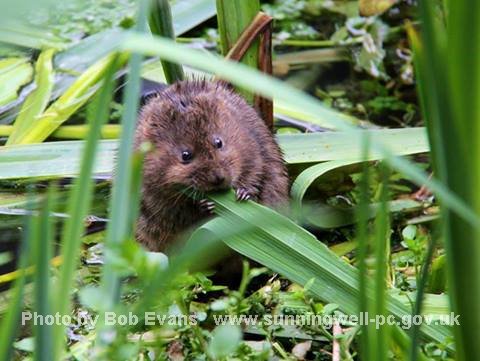 From time to time the issue of the village pond surfaces and, in particular, there is discussion about its condition and what, if anything, should be done about it.

In 2020, the Parish Council appointed Bob Evans as the Pond Warden.

In 2019 the Parish Council agreed to obtain the opinion of an expert in the field and Dr. Jeremy Biggs was asked to report on the matter.

Dr. Biggs is a Director of the Freshwater Habitats Trust and a member of the European Pond Conservation Network steering group. His report was delivered to the Council at the end of 2019 and in early 2020 the Council agreed to follow his professional advice. He concluded “There is no need for immediate practical action……. The creation of open water makes the view nicer for people but has no benefit for wildlife……In short, my advice would be to keep pretty much the status quo” A copy of the report is reproduced below.

Cllr. Mike Wykes summarised the issue in a brief and clear manner when he said that “….the crucial decision is whether people want something pretty to look at, or a more aquatic wild haven and an ecosystem that cleans up the water as it flows through”.

The Parish Council, having agreed with the report, decided to review the position nearer the end of 2020. At its meeting held on 26th October 2020, the Council reminded those attending that the pond had not been neglected but had been the subject of a report by an expert, whose advice has been followed. Clearly, there is local support for greater intervention and Vice Chairman Oliver Isaacs proposed this should be addressed and someone should be appointed to oversee any action. This was voted on and was carried unanimously.

Cllr Paul Wooldridge suggested the pond maintenance should be linked to the successful management of the village green, and that Bob Evans should be asked to add the pond to his current village green responsibilities. This was agreed.

Previous work and activity relating to the pond

There have been two earlier scientific reports relating to the pond which broadly speaking came to similar conclusions to the 2019 report. In 2008, around the time a stage was built over the pond for village events, the Environment Agency referred to “compromises that may be needed for either the ecological side of the management or the other aspects” and advocated the consideration of more plant diversity.

About this time Mike Woodward, a prominent local resident, wrote to members of the Parish Council: “Some may say it looks a mess but, as previously stated, in our attempts to make the pond look nice and tidy we have done more harm than good”. (The report says the growth of algae was down to usual nutrients that seep into the pond, coupled with the fact the pond group had been very active in recent years in clearing the basin of debris from ducks and weeds that stem the water flow and affect the visual appearance).

In 2003 the Wildlife Trusts report said that ducks create a grazing pressure on the aquatic vegetation. Reducing that hopefully would provide a recovery period that would see an increase in the diversity of plants in and around the pond. They also wrote: “Before you undertake any further pond management, you need to consider what you actually want from the pond. Is it a wildlife resource …or an amenity duck pond?”

REPORT ON THE CONDITION OF SUNNINGWELL VILLAGE POND

There is no need for immediate practical action. The pond is moderately polluted by nitrate from its inflow which the plants in the pond reduce (a process known as denitrification) as the water flows through the pond.

Most animal life will be associated with the two dominant water plants: fool’s water-cress and a species of water-starwort. Removing these will reduce habitat for pond animals.

The creation of open water makes the view nicer for people but has no benefit for wildlife; the main effect will be to reduce the amount of habitat for animals. So as long as people are happy with the present proportions of vegetation, the pond can be left as it is.

I’ve now visited the pond (on Wednesday 20th November) and had a look at the plants, and tested the water using our standard ‘Clean Water for Wildlife’ test kits. We use these kits to assess two very widespread water pollutants that cause many problems in ponds: phosphate and nitrate, both essentially forms of fertiliser pollution which, whilst not actually toxic, cause severe damage to freshwaters. They do this mainly by promoting the the growth of common and tough water plants and algae at the expense of more sensitive species. This reduces diversity, limiting the variety of plant and animal life in ponds, whilst benefiting tolerant species.

The inflow to the pond shows a moderate level of nitrate pollution and no phosphate pollution (see Picture 1). As the water passes through the pond, some of the nitrate is removed so that at the outflow nitrate concentrations are at the level that we regard as natural, making the water unpolluted (Picture 2). See this link for more explanation of the Clean Water for Wildlife technique: https://freshwaterhabitats.org.uk/projects/clean-water/

and look especially at the ‘What do you results mean’ link.

Picture 1. Inflow pollution. Clean Water for Wildlife test kits which show, by a colour change, inflow phosphate level (left) and nitrate level (right). There is no detectable phosphate pollution (shown by no color change), but some nitrate pollution, shown by the amount of colour change (which indicates 0.5-1.0 milligrammes nitrate per litre of water: the more polluted, the pinker the colour). You can check this against the online colour chart here: https://freshwaterhabitats.org.uk/wp-content/uploads/2017/03/Clean-water_A5leaflet_FINAL_recording-form-web.pdf

Picture 2. Outflow pollution. There is still no phosphate pollution (tube on the left), shown by the lack of colour change, and nitrate levels on the right barely cause any colour change, indicating that the level of nitrate present is non-polluting as it leaves the pond at 0.2 milligrammes nitrate per litre of water.

The dense growths of plants in the pond (Picture 3) are almost certainly intercepting some of the nitrate. There are lush growths of fool’s water cress (the light green stems rising out of the water) and, underwater, a species of water starwort. The latter are quite difficult to identify but the exact species is probably common starwort. Both plants are common and not in any way threatened, being tolerant of moderate pollution, and common in both stream and ponds. They are helping to slightly clean up the water as it runs through the pond. More importantly they are providing habitat for probably thousands of freshwater invertebrates which live amongst the plants.

Picture 3. General view of water starwort (front) and fool’s watercress (back, emerging from the water)

In short, my advice would be to keep pretty much the status quo. Have some open water at the front, but let the plants grow up in the back half of the pond, where they are providing habitat and cleaning the water.

At the moment there is no need for any practical intervention. Perhaps in a year or two you could remove some water plants to maintain open water, which people like to look at, but there is no biological benefit in this. Most animals in the pond will be found amongst the plants – which are their habitat – with rather few in the open water.

It’s perhaps worth saying that the natural tendency here would be for the stream to rapidly fill the pond basin with sediments (10 years would probably see it filled in completely) to create an area of wetland that probably supported more plant species, and probably as wide a variety of freshwater animals, as the pond does now.